I fell in love with the Waltzingmouse ‘Big Berries – Strawberries’ when I first saw them, so when the Cherries was released I bought it straight away. Unfortunately it seems to have been one of those stamps that I get & have lots of ideas for, but never get around to using! When Stampin’ UP! released the Cherry Scented Embossing Powder I knew it would be a match made in heaven – Cherry scented Big Berries!

This fortnight’s Waltzingmouse Fanatics Challenge is Texture – embossing folders, embossing powders, fabric; so I HAD to make this card for that challenge!!

I inked the berry stamp with SU! ‘Real Red’ ink & stamped it on white card, then I used VersaMark ink & covered the cherries in scented embossing powder and set it with my heat tool. Unfortunately I don’t have the right sized punch to cut out the cherries, but I do have the Spellbinders Classic Circles set and used the second smallest to cut out the cherries – the die is a tiny bit too small, but I didn’t think it mattered too much. The leaf was inked in Tim Holtz Distess ink ‘Mowed Lawn’ on white card and I fussy cut it. The twig was inked in SU! ‘Early Espresso’ on a 3×4 piece of white card and the cherries and leaf were arranged over it and attached with roll-on glue. I made a panel of red card to frame the cherries and attached the main image to the red panel.

For the background I inked the smallest Gingham pattern stamp in ‘Gingham & Co‘ with ‘Real Red’ and stamped it on white card. For the other background panel I inked the cherries from SU! ‘Perfectly Preserved’ set in Real Red and Mowed Lawn to create a repeating pattern.

I inked the sentiment with Early Espresso ink on white card and used the second smallest Spellbinders Labels 4 die to cut it out. I attached both background panels to the textured white C5 base card with roll-on glue. I used the same red card that I had used as the panel around the big cherries to cut out a border using my Martha Stewart Scallop Dot Edger punch. I used double-sided tape to attach some red gingham ribbon to the panel and stuck it over the join between the two background panels. I tied a bow with the same ribbon and attached on top of the ribbon with Glossy Accents. Last, but not least I attached the sentiment with foam pads.

I would like to enter this card in the Waltzingmouse Fanatics Challenge #18 – Texture. 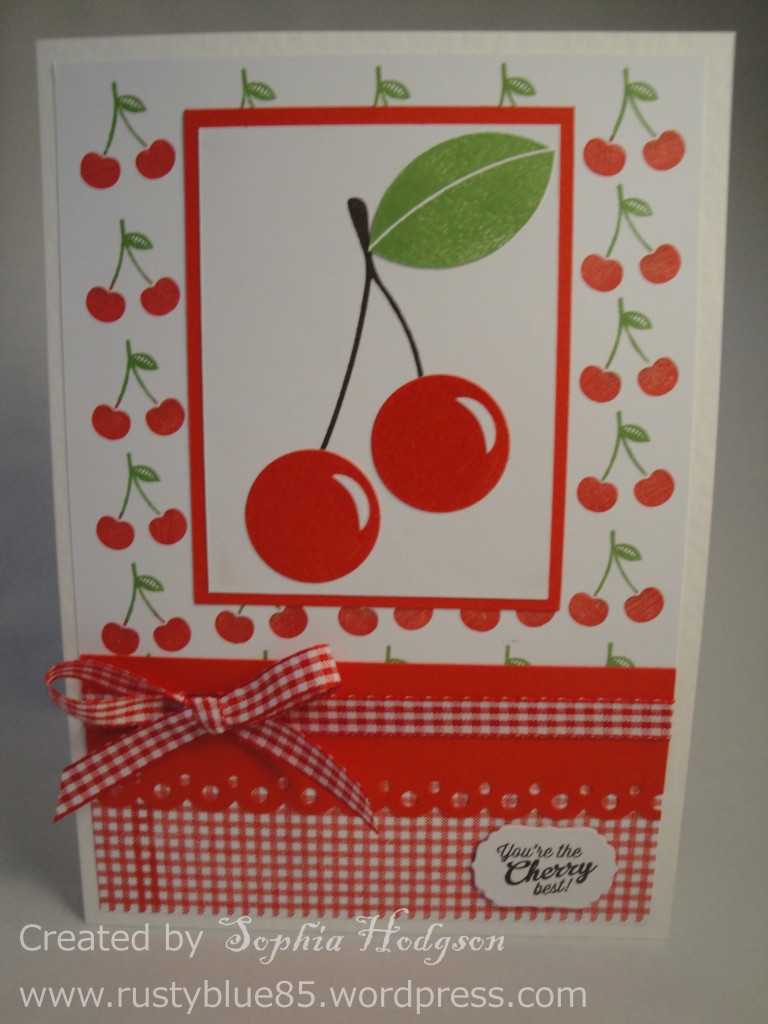 5 thoughts on “You’re the Cherry Best”