A friend of mine loves to play computer games and when we were younger he would make little movies with friends where he played the hero against another of our friends as the ‘evil bad guy’. So because of the movies he made I’ve decided to make him a Superhero-themed card. 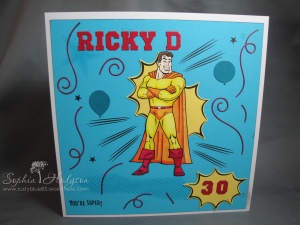 I have lots of Kenny K rubber stamps that I got from Whimsy Stamps, but he’s now doing digi stamps. I purchase the Superhero digi from his website and printed it on Crafters Companion Neenah Classic Crest Card. I coloured it using my Spectrum Noir pens: GB5, CT2, CT3, CT4, OR1, OR2, FS2, FS3, CR11, DR4 and DR5. After colouring I fussy cut the Superhero and went around the edge with a black pen to give a bold outline. The Waltzingmouse ‘Kaboom‘ stamp set fits really well with the Superhero theme, I stamped the ‘explosion’ on Daffodil Delight card in VersaFine ‘Onyx Black’ ink several times. I fussy cut two of the explosions out, I cut one in half and arranged it behind the Superhero so it appeared bigger and used Hi-Tack very sticky glue to attach it behind the image.

Using the Memory Box ‘Varsity’ alphabet dies and Real Red card I cut out my friend’s name and 30. I attached the 30 to one of the ‘explosions’ with Quicky Glue (unfortunately the ink was still a bit wet & I ended up with a smudge of black on the yellow, and if I had unlimited time and card I would have made this element again).

I cut a 7 1/2 x 7 1/2 inch Tempting Turquoise square and stamped a long ‘shadow’ for the Superhero and a star in Tempting Turquoise ink so it’s only a subtle tone-on-tone image. The ‘shadow’ is from the Waltzingmouse ‘Halftone Backgrounds‘ stamp set. I had the Superhero in place over the turquoise panel so I could place the black lines and stars around the image. I maske the sentiment from the ‘Kaboom’ stamp set so it read “you’re super!” down in the bottom left corner. I tried to put the black line around the edge of the turquoise panel but ended up with a little I attached the turquoise panel to the white 8 x 8 inch card base with roll-on glue.

First I attached the Superhero with Hi-Tack very sticky glue so he was in the right place. I lined up the Varsity letters on a ruler and attached them with Quicky Glue pen. I went to attach the ‘explosion iwth the 30 on it and managed to get some glue on my finger and made a nasty smudge on the white base card, which really annoyed me, but it was one of the last things I did so it was too late to do anything about it 😦 I wanted to have some confetti & streamers on the card for a ‘birthday feel’ so I used my Lawn Fawn ‘Party Balloons‘ dies to cut streamers from Rich Razzleberry card and two balloons from Island Indigo card and attached them with Quicky Glue pen. 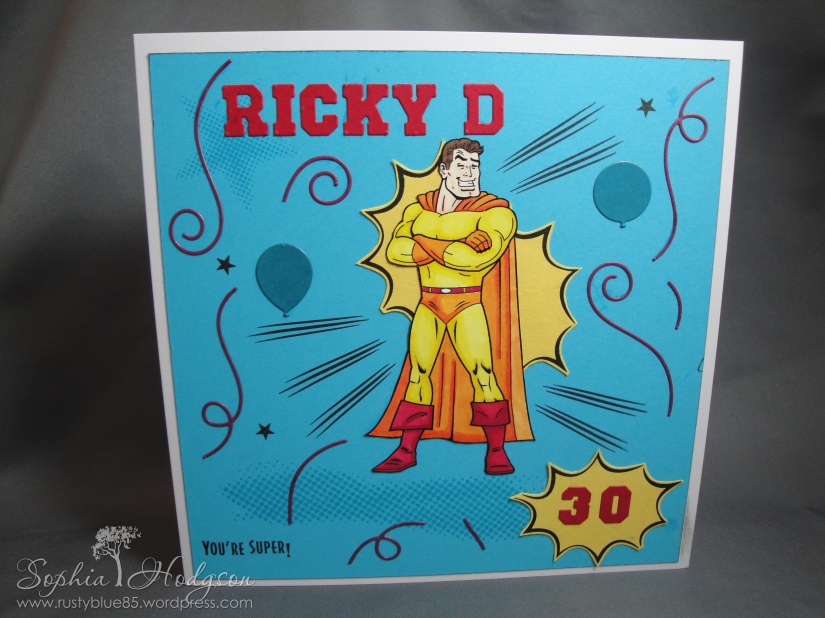 Last, but not least I made him a matching tag. I die cut the Waltzingmouse Folding Tag Die from some Tempting Turquoise card. I die cut the star reinforcer from the same die set in Daffodil Delight and stuck them on with Quicky Glue pen.  I stamped the star from the Kaboom set in Tempting Turquoise on the tag and I added some more Lawn Fawn Rich Razzleberry streamers with Quicky Glue pen. 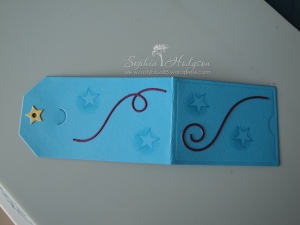 I’m going to my friend’s birthday party now, where he has hired an inflatable bungee run! I’m going to have a great weekend – I hope you have a nice weekend too! Will you be watching Wimbledon or the British Grand Prix?