Have you seen Suicide Squad at the cinema? I went to see it at the weekend with a friend and we enjoyed it but felt that the costumes were very tailored to a male audience. I loved all the promotional artwork though – a mix of Neon and classic comic book style. Today is my friend’s birthday and she is a huge gaming fan and likes to go to gaming/anime/comic book conventions and makes her own costumes – she’s so creative, so I always want to make a special effort with her card. I thought creating a Suicide Squad inspired card would appeal to her comic book leanings and be really relevant to what is in the cinema on her birthday.

I wanted to add so many elements to this card that I knew it would have to be a big one so I started with an 8×8 card base. I had some metallic yellow A4 paper in my stash from Uni that was just the right colour, so I used my acrylic paints to create some splashes and paint some areas too. I used roll-on glue to attach the paper to the card base (because it was so thin I didn’t want to leave it lying around in case is tore or got creased, so adding it to the card base gave it some support).

To get some more neon in I die cut some neon pink and green card using Spellbinders ‘Standard Circles Small’ and Tattered Lace ‘Pentagons’. I stamped the Waltzingmouse BAM from the’Kaboom’ stamp set in VersaMark ink and embossed it with black embossing powder. I also die cut the Waltzingmouse ‘Kaboom’ die from red and black card stock to create the dropped shadow and I used red double sided tape to hold the whole thing together on the back, then to attach it to the green pentagon.

I didn’t want the neon shapes to be complete, I wanted them hanging off the edge so I cut them with my paper trimmer, then attached them with HI-Tack glue so I had a bit of wriggle time before it grabbed so I could line them up perfectly.

To get the skull in I used my embossing pen to draw some crosses and the triangles for the nose and used black embossing powder, Heat It Up! ‘Cranberry’ powder and ‘Fired Brick’ Distress Powder.

For the sentiment I used my Crafter’s Companion ‘Contemporary Alphabet’ die cut from purple card and I inked the letters randomly with ‘Chipped Sapphire’ Distress Ink. The Suicide Squad posters have cracks in the letters, so I wanted to put cracks in mine too so I randomly chopped in with my scissors. The card was looking a bit tame still, so I added more acrylic paint spashes with the neon panels in place.

Lastly, I wanted to re-create the choker Harly Quinn wears in the movie that says ‘PUDDIN’ so I used the same alphabet dies to create the letters from gold mirri card and cut a strip to adhere them to. I really worked the strip of card as I wanted it to be the choker, so I wanted it to be pliable. I attached the letters to the strip with Hi-Tack glue. To get the end I used my Spellbinders Pennants dies and I also added some holes using my Crop-A-Dile. To the other end I wanted to add a buckle so I used the layering dies included in the ‘Pentagon Box’ die set to cut a square and then cut out the centre, then I cut a rectangle of mirri card to be the pin in the buckle. I wrapped the strip around the square and then used Hi-Tack glue to attach the buckle end and pointed end to the card base with the middle raised up off the card for dimention. Whilst the glue was still wet I inserted the pin under the buckle. 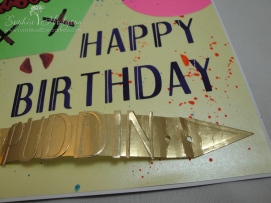 I hope my friend likes her card and can tell it was inspired by Suicide Squad artwork.

I found a website where you can ‘Squad Yourself’ so I’ve been able to create my own Sucide Squad avatar.

Do you like comic books? Do you like the style? I hope this card will have inspired you for some weekend crafting! Have you seen the exclusive Simon Says Stamp #STAMPtember2016 releases? I think I might need to do some buying!!!