It will be a friend of the family’s birthday on Saturday, so I’ve made her a card to celebrate. She has lived abroad in some very exotic places & I made her an exploding box card with orchids for her 60th birthday. This birthday card wasn’t going to be any less exotic, so when I saw this GORGEOUS set by My Favorite Things, I had to use it on this project!

When I first got the set I just played around with stamping & embossing the plumeria to make sure I was able to get the yellow bit where I wanted it (harder than it sounds when you’ve embossed white embossing powder on white card!) but eventually I had enough flowers that I liked so I cut them out. The petals are ‘Seafoam White’ Papermania embossing powder and ‘Yellow Blush Blaze’ Cosmic Shimmer embossing powder.

The leaves are clear embossed on Gumball Green card stock – I love the way they turned out!

I have seen lots of ways to make your own enamel dots & I think I will try the clear embossing of card stock some time, but for this project I used nail varnish. I dropped neon yellow nail varnish onto my silicon craft sheet & left the dots for a few days to harden & they just pop off the sheet, then they can be applied to a card with some Glossy Accents. 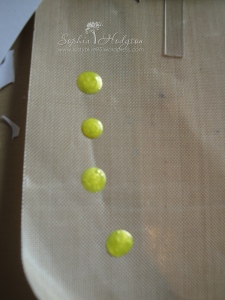 When I bought this ‘black’ card in the craft shop, I was convinced it was black, but the second I put it next to black it was obviously a very dark navy…. Grrrrr…. But, hey we all make mistakes, don’t we?! So I cut out a square from the navy card & attached some yellow ribbon over it, then I stuck the panel on top of a white layer I had gutted earlier & attached this to the black 6×6 base card.

I arranged the flowers & leaves on the card, then when I had them where I wanted them I attached them with Glossy Accents, but they still had lots of dimention.

I stamped the sentiment from the Tropical Sensations on some white card, then used the Spellbinders labels die to cut it out. Because the flowers & leaves were so dimentional I attached the label with sticky foam pads. Last, but not least I attached my nail varnish dots to the navy panel. What do you think? 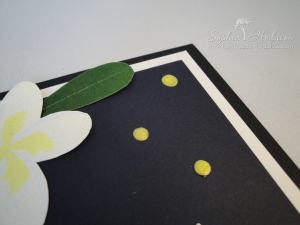