I see a theme emerging! Last week I made cards using the MFT fiesta word die, this week I’ve made some pinata cards!

I feel like I should call this post “When Nuvo drops don’t behave!”. Initially, I created a card using the pinata dies and the largest ‘In and Out Stitched Oval STAX’ die to create a window for the pinata to hang in. I used some patterned paper to back the window and the pinata was adhered in place on the patterned paper with a string above it so it appeared to be hanging from something. I thought it was super cute, but wanted to create a shaker card for my YouTube video. I had already pretty much made the card once, what could possibly go wrong? 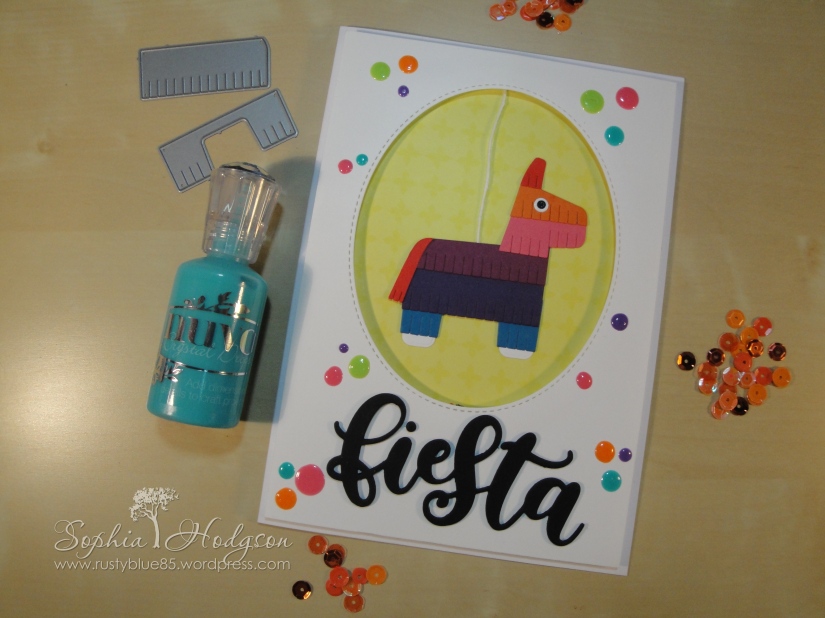 I die cut the stitched oval from some white card stock and added some acetate over the back of the window. Then I added some doubled up foam strips to create the shaker element for the sequins to go in.

I wanted the pinata to move in the window when the card is shaken but not stick to the edges of the foam tape, so I added it to the window with a length of clear Trimits stretch cord. I added doodlebug design sequins in ‘lilac’ and ‘tangerine’ to the window, then removed the adhesive backing from the foam and adhered a white piece of card behind the window. I added this shaker element to a 5×7 white card base. For the sentiment I had die cut four fiesta word die cuts from black card stock and adhered them together to make a thick element, almost like chipboard.

To add finishing touches to the card I used Nuvo Crystal Drops in ‘Carnation Pink’, ‘Ripened Pumpkin’, ‘Apple Green’, ‘Caribbean Ocean’ and ‘Crushed Grape’. Unfortunately the temperature this weekend plummeted on Saturday and it felt quite cold when I was adding the Nuvo drops, so they were thicker in consistency than they had been recently. So, despite testing the drops on some scrap paper first, the drops were a disaster and either were too thick and wouldn’t flatten out, or I squeezed the bottle too hard and made the drops too big and they became irregularly shaped. When they were dry the card was a disaster!!

So here is the first attempt I made at the shaker card:

And the second one (much better, I’m sure you will agree!!): 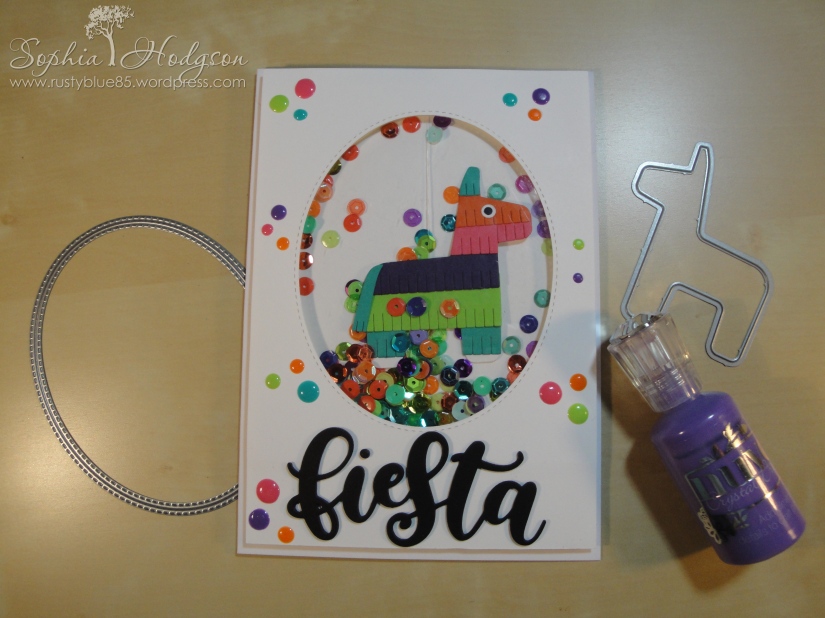 Because I wanted to create this second card quickly I used card stock to make the pinata layers rather than tissue paper.

Do you ever have problems with Nuvo Crystal Drops?