I don’t know why but the second I saw this set debuted on YouTube I knew I HAD to have it – it was love a first sight… So I have been checking the Seven Hills Crafts website daily (sometimes more than daily) until it was in stock and I snapped it up, then set up camp next to my mailbox until the postman arrived 🙂

I don’t have many yellow or orange ink pads because I’m more of a green/blue/ purple kinda girl, so when I ordered the ‘Main Squeeze’ stamp and die set I also bought the ‘Pocketful of Sunshine’ and ‘Warm and Cozy’ ink pad sets. I used the larger layering stamp as the lemon/orange and used Sunkissed for the base, Orange Cream for the second layer and Autumn Blaze for the fourth layer, then for the lemon base layer I used Citrus Burst, then Fresh Lemon for the second layer and Maple Yellow for the fourth layer.

For the limes I used Hero Arts inks, Lime Green for the base stamp, then Green Hills for the next layer and Fresh Lawn for the fourth layer (I didn’t use the third layer).

I had a little bit of fun trying to line up the dies and stamped images, so I put a mark on the top of the die with some alcohol marker to make lining it up easier in future.

The sentiment was stamped with VersaMark ink on black card and embossed with Papermania seafoam white embossing powder.

To get a little bit of texture on the background I used my Darice polka dot embossing folder on Stampin’ UP! Whisper White 80lb card then cut a panel to fit on a 5×7 card base and attached it to a card base with foam tape.

I tried a few different arrangements of the fruits on the card before deciding on the arrangement with the limes in front with foam tape and attached the orange and lemon slices with Hi-Tack glue.

Last but not least I added some Nuvo Jewel Drops on the seeds of the fruits in Orange Marmalade, Limoncello and Key Lime. 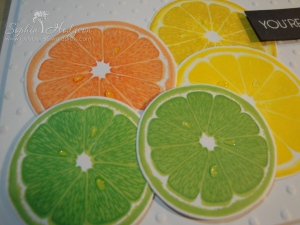 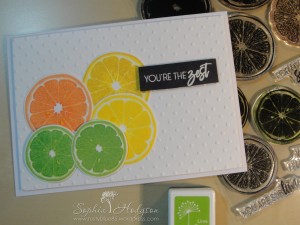 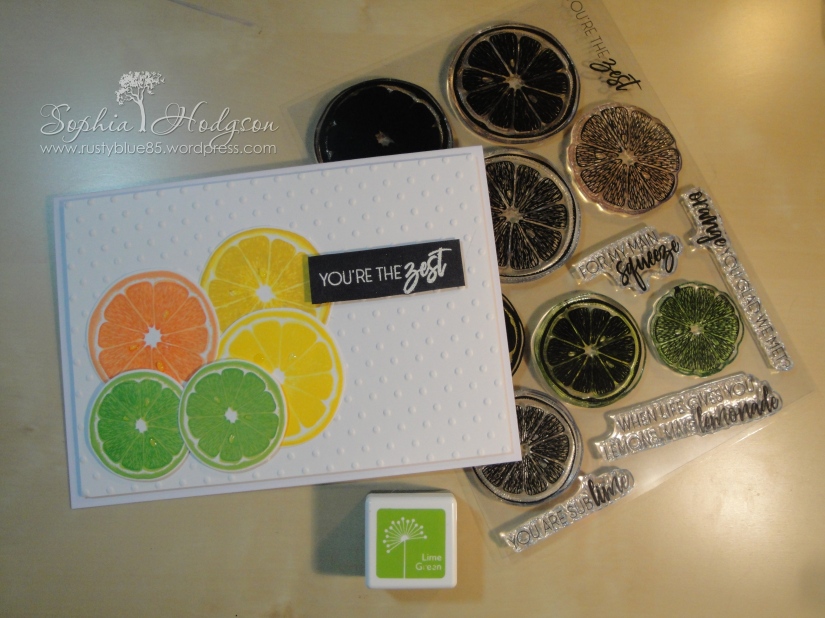