Phew! I managed to finish this in time to enter the Waltzingmouse Fanatics Challenge! This fortnight’s challenge was colours: 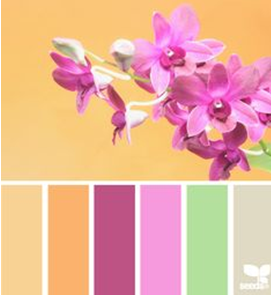 Aren’t those colours lovely & fresh? I LOVE orchids, so my first thought was to make loads of paper orchids in the colour scheme, but then I realised that that wouldn’t really showcase my Waltzingmouse stamps and dies to their best potential! So instead, this is what I came up with in a sketch, and as you can see it changed a bit from the initial idea, but I think the finished product looks quite nice! 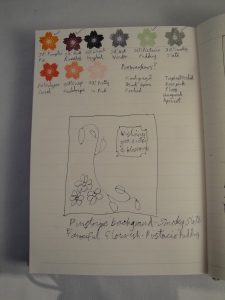 I started out with an A5 white textured card base. I cut some Stampin’ UP! ‘Pistachio Pudding’ card stock to make the background and attached it with roll-on glue.

Next I inked up the ‘Pinstripe Backgrounder‘ in SU! ‘Smoky Slate’ on white card, cut it out with my guillotine and attached it to the base with roll-on glue. The buttons are SU! Calypso Coral from the ‘Sycamore Street Ribbon and Button Pack’, I attached them to the card base with Glossy Accents.

Then I die cut the Cheery Lynn Designs ‘Fanciful Flourish’ (#B117) from some more Pistachio Pudding cardstock. I inked up the sentiment from the ‘Vintage Garden – Seed Packet‘ set with Crisp Cantaloupe and then around the edges of the stamp in Calypso Coral & stamped it on white card stock and die cut it with the second smallest Spellbinders Labels 2 die. I also gently inked around the edge of the lable with Crisp Cantaloupe using a sponge.

I used the ‘Funky Flowers’ set for the flowers that I inked in VersaMark Watermark ink & for reasons best known to my embossing powder the ‘Raspberry Violet Blaze’ would not stick properly to the ink so I had to do it in several goes (which is why this card took SOOOOO long to make!!!!), thankfully the centers of the flowers were ‘Orange Flame Blaze’ which behaved as expected! I die cut the flowers with the co-ordinating die set, then arranged the flourish & flowers over the pinstripe panel until I had things how I liked them, then I stuck them down with roll-on or Quicky Glue. 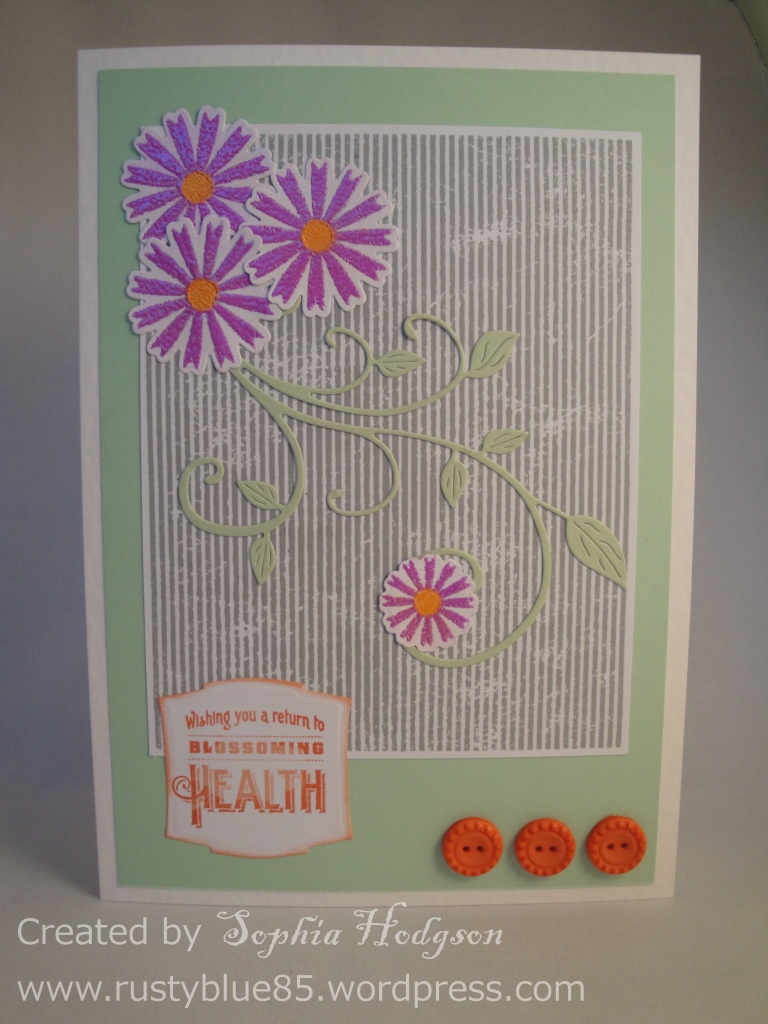 I will be entering this card in the Waltzingmouse Fanatics Challenge #20 (Colours). You can still enter too – but you’ll have to get your skates on!!!!